Using a Watch as a Compass

Direction-finding using only the sun and an analog watch is a trick that I remember first reading about when I was in elementary school.  I think it was in one of Seymour Simon’s Einstein Anderson “science detective” stories, but I’m not sure; being a kid was a long time ago.

More recently, I saw it mentioned again in a shark movie that I happened to sit through, The Reef.  In the movie, a sailboat runs aground and capsizes in shallow water; rather than stay with the boat, the people on board try to swim north toward a distant island.  It doesn’t go well.

Before leaving the boat, one guy looks at his watch, looks at the sun, mumbles a few calculations, then says, “That’s north,” and off they go.  I wondered if those calculations were correct, particularly since the movie was set in Australia– the Southern Hemisphere– and the method didn’t sound quite like I remembered it.  After some additional searching on the web, along with some experiments and calculations of my own, I learned that descriptions of this “Boy Scout” survival trick are frequently incorrect, incomplete, or misleading.  But more interestingly, such descriptions are almost never accompanied by a warning of just how inaccurate the method can be, even when it is used properly.  My suggestion: keep your GPS-equipped smart phone with you at all times.

How it works: If you are north of the tropics, hold your watch face horizontal, and turn so that the hour hand points toward the sun.  Then the ray bisecting the angle between the hour hand and 12 o’clock noon points approximately true south.  (I will deal with the Southern Hemisphere later.)  See the figure below for an example.

Example of using a watch as a compass (Northern Hemisphere, 10:30 am).

The first potential source of confusion is which direction is north and which is south: do you bisect the “small” angle or the “large” angle between the hour hand and 12 o’clock?  Some sources suggest that “north will be the direction further from the sun”– that is, bisecting the smaller angle points south.  Although this is usually the case, it can fail when the sun is up before 6:00 am or after 6:00 pm.  It seems simpler to just remember that south bisects the angle that sweeps in time from the hour hand toward noon (clockwise in the morning, counter-clockwise in the afternoon).

How well it works: This is what I found most interesting about this problem.  One survivalist blog (a somewhat amusing phenomenon, if you think about it) makes the strangely precise and grossly false claim that “the accuracy of this method is within 8 degrees (US and Canada).”  In fact, the error in the estimate of direction quite often exceeds 30 degrees, and can even exceed 80 degrees depending on where– and when– you are.

There are two primary sources of error.  The most obvious source of error is the accuracy of your watch.  Several online sites state that “the direction will be correct if the watch is set for true local time, without adjustments for Daylight Savings Time [sic].”  More precisely, the method is more accurate if your watch reads 12 o’clock when the sun is at its highest point in the sky, due directly south.

The problem is that “standard time” and “apparent solar time” rarely coincide exactly.  Everyone in a particular time zone thinks it is the same time, despite the fact that those on the eastern edge of a time zone will see the sun rise approximately one hour earlier than those on the western edge.  To make matters worse, the time zones in the U.S. are rather erratically shaped, resulting in even larger differences than would be the case if time zone boundaries were simple, straight lines of longitude, 15 degrees apart: 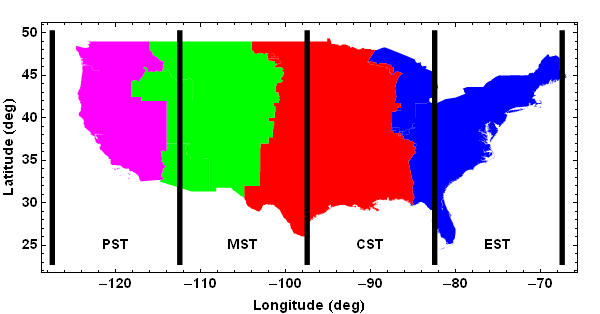 The time zones in the contiguous 48 states.

The second source of error is the latitude of your position: as several online sites suggest, “the further you are from the equator, the more accurate this method will be.”  This is essentially true, and is by far the larger of the two sources of error.  What is often left out, however, is that the method isn’t simply less accurate near the equator, it effectively doesn’t work “at all.”  In the tropics– the band around the earth between about 23.5 degrees south and 23.5 degrees north– not only is the sun higher in the sky, making it more difficult to accurately estimate its direction in the first place, the sun’s motion is also not as well-behaved (why?), so that the error in your estimate of direction can approach 180 degrees, even assuming an accurate estimate of the sun’s direction.

So how well does it work?  As approximately “best case” behavior, following is a plot showing the error in estimated direction over the course of the year 2012, at the Northwest Angle Inlet in Lake of the Woods, Minnesota (the northernmost point in the contiguous 48 states).

The general shape of this plot is typical; the method works best in the fall and winter months, with the worst case behavior in the middle of the year.  Even this far north, errors can exceed 30 degrees.

At the other extreme, the following plot is for the Florida Keys, which suffer from being just north of the Tropic of Cancer, where errors are the worst.  However, the method still works reasonably well during the “cold” months.

Compass error in the Florida Keys for the year 2012.

Finally, back to the Southern Hemisphere.  Here, the method is only slightly different: if you are south of the tropics, then point 12 o’clock at the sun, and north bisects the angle between the hour hand and 12 o’clock noon (with the same “sweeping in time” sense described above).  I found several different incorrect variations on this online; perhaps the most disappointing was an otherwise very cool interactive Mathematica demonstration on the Wolfram web site.

And the method used in the Australian shark movie?  The description of the method turned out to be correct… but the action takes place at approximately 10 degrees south latitude, where all bets are off.  At any rate, it wasn’t enough to escape a great white shark.

51 Responses to Using a Watch as a Compass