Follow-up: I found two identical packs of Skittles, among 468 packs with a total of 27,740 Skittles

Posted on April 6, 2019 by possiblywrong

This is a follow-up to a post from earlier this year discussing the likelihood of encountering two identical packs of Skittles, that is, two packs having exactly the same number of candies of each flavor. Under some reasonable assumptions, it was estimated that we should expect to have to inspect “only about 400-500 packs” on average until encountering a first duplicate. This is interesting, because as described in that earlier post, there are millions of different possible packs– or even if we discount those that are much less likely to occur (like, say, a pack of nothing but red Skittles), then there are still hundreds of thousands of different “likely” packs that we might expect to encounter.

I purchased all of the 2.17-ounce packs of Skittles for this experiment from Amazon in boxes of 36 packs each. From 12 January through 4 April, I worked my way through 13 boxes, for a total of 468 packs, at the approximate rate of six packs per day. This was enough to feel like I was making progress each day, but not enough to become annoying or risk clerical errors. For each six-pack recording session, I did the following:

The photos captured all of the contents of each pack, including any small flakes and chips of flavored coating that were easy to disregard… but also larger “chunks” of misshapen paste that were often only partially coated or not at all, that required some criteria up front to determine whether or how to count. For this experiment, my threshold for counting a chunk was answering “Yes” to all three of (a) is it greater than half the size of a “normal” Skittle, (b) is it completely coated with a single clearly identifiable flavor color, and (c) is it not gross, that is, would I be willing to eat it? Any “No” answer resulted in recording that pack as containing “uncounted” material, such as the pack shown below.

Example of a Skittles pack recorded with 15 green candies and an “uncounted” chunk.

The entire data set is available here as well as on GitHub. The following figure shows the photos of all 468 packs (the originals are 1024×768 pixels each), with the found pair of identical packs circled in red.

All 468 packs of Skittles, arranged top to bottom, in columns left to right. Each pair of columns corresponds to a box of 36 packs. The two identical packs are circled in red.

So, what’s the point? Why bother with nearly three months of effort to collect this data? One easy answer is that I simply found it interesting. But I think a better answer is that this seemed like a great opportunity to demonstrate the predictive power of mathematics. A few months ago, we did some calculations on a cocktail napkin, so to speak, predicting that we should be able to find a pair of identical packs of Skittles with a reasonably– and perhaps surprisingly– small amount of effort. Actually seeing that effort through to the finish line can be a vivid demonstration for students of this predictive power of what might otherwise be viewed as “merely abstract” and not concretely useful mathematics.

(As an aside, I think the fact that this particular concrete application happens to be recreational, or even downright frivolous, is beside the point. For one thing, recreational mathematics is fun. But perhaps more importantly, there are useful, non-recreational, “real-world” applications of the same underlying mathematics. Cryptography is one such example application; this experiment is really just a birthday attack in slightly more complicated form.)

For completeness, let’s review the approach discussed in the previous post for estimating the number of packs we need to inspect to find a duplicate. We assume that the color of each individual Skittle is independently and uniformly distributed among the

of Skittles in a pack is independently distributed with density

, where we guessed at

based on similar past studies.

We use generating functions to compute the probability

that two particular randomly selected packs of Skittles would be identical, where

Given this, a reasonable approximation of the expected number of packs we need to inspect until encountering a first duplicate is

, or about 400-500 packs depending on our assumption for the pack size density

The most common and controversial question asked about Skittles seems to be whether all five flavors are indeed uniformly distributed, or whether some flavors are more common than others. The following figure shows the distribution observed in this sample of 468 packs.

Somewhat unfortunately, this data set potentially adds fuel to the frequent accusation that the yellow Skittles dominate. However, I leave it to an interested reader to consider and analyze whether this departure from uniformity is significant.

How accurate was our prior assumed distribution

for the total number of Skittles in each pack? The following figure shows the observed distribution from this sample of 468 packs, with the mean of 59.2735 Skittles per pack shown in red. 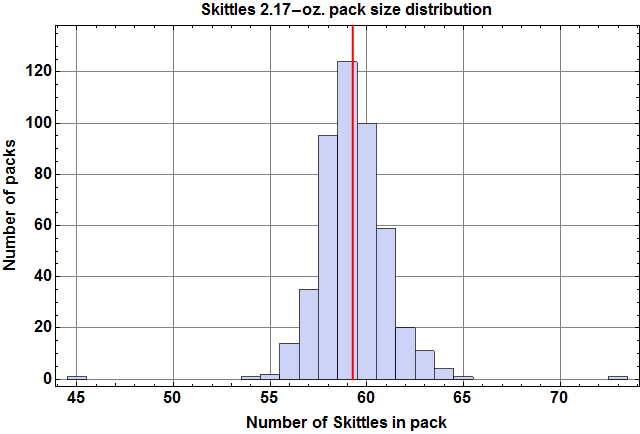 Histogram of total number of Skittles in each pack. The mean of 59.2735 is shown in red.

Although our prior assumed average of 60 Skittles per pack was reasonable, there is strong evidence against our assumption of independence from one pack to the next, as shown in the following figure. The x-axis indicates the pack number from 1 to 468, and the y-axis indicates the number of Skittles in the pack, either total (in black) or of each individual color. The vertical grid lines show the grouping of 36 packs per box.

Number of Skittles per pack (total and of each color) vs. pack number.

The colored curves at bottom really just indicate the frequency and extent of outliers for the individual flavors; for example, we can see that every color appeared on at least 2 and at most 24 Skittles in every pack. The most interesting aspect of this figure, though, is the consecutive spikes in total number of Skittles shown by the black curve, with the minimum of 45 Skittles in pack #291 immediately followed by the maximum of 73 Skittles in pack #292. (See this past analysis of a single box of 36 packs that shows similar behavior.) This suggests that the dispenser that fills each pack targets an amortized rate of weight or perhaps volume, got jammed somehow resulting in an underfilled pack, and in getting “unjammed” overfilled the subsequent pack.

This is admittedly just speculation; note, for example, that the 36 packs in each box are relatively free to shift around, and I made only a modest effort to pull packs from each box in a consistent “top to bottom, front to back” order as I recorded them. So although each group of 36 packs in this data set definitely come from the same box, the order of packs within each group of 36 does not necessarily correspond to the order in which the packs were filled at the factory.

At any rate, if the objective of this experiment were to obtain a representative “truly random” sample of packs of Skittles, then the above behavior suggests that buying these 36-pack boxes in bulk is probably not recommended.

Finally, one additional caveat: fortunately the primary objective of this experiment was not to obtain a “truly random” sample, but only to confirm the predicted “ease” with which we could find a pair of identical packs of Skittles. However, suppose that we did want to use this data set as a “truly random” sample… and further suppose that we could eliminate the practical imperfections suggested above, so that each pack was indeed a theoretically perfect, independent random sample.

Then even in this clean room thought experiment, we still have a problem: by stopping our sampling procedure upon encountering a duplicate, we have biased the distribution of possible resulting sample data sets! This can perhaps be most clearly seen with a simpler setup that allows an analytical solution: suppose that each pack contains just

Skittles, and each individual Skittle is independently equally likely to be one of just

possible colors, red or green. If we collect any fixed number of sample packs, then we should expect to observe an “all-red” pack with two red Skittles exactly 1/4 of the time. But if we instead collect sample packs until we observe a first duplicate, and then count the fraction that are all red, the expected value of this fraction is slightly less than 1/4 (181/768, to be exact). That is, by stopping with a duplicate, we are less likely to even get a chance to observe the more rare all-red (or all-green) packs.

It’s an interesting problem to quantify the extent of this effect (which I suspect is vanishingly small) with actual packs of Skittles, where the numbers of candies are larger, and the probabilities of those “extreme” compositions such as all reds is so small as to be effectively zero.

54 Responses to Follow-up: I found two identical packs of Skittles, among 468 packs with a total of 27,740 Skittles